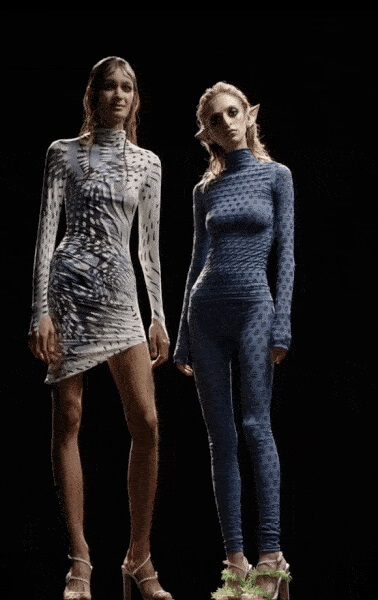 Designer Maisie Schloss’ digitally-crafted psychedelic prints and chic cyber-inspired partywear feel right at home within a fashion industry that is looking towards the possibilities of a virtual future. During New York Fashion Week, she leaned into this digital fantasy, presenting her latest collection for her label Maisie Wilen on 7-foot-tall holographic models.

Over the weekend, attendees of the Fall 2022 show entered into a gallery setting to find the virtual models lined up in a row, performing a set of repetitive motions, like GIFs. Inspired by the dolls of Mattel’s 2010s franchise “Monster High,” some wore green and blue body paint, creature ears and fins while they rotated in space, swayed their hips, pointed at guests, and sometimes emitted shocks of animated blue lightning or bubbles.

The retro-futuristic collection has plenty of nods to virtual worlds — some models wore VR glasses — with some throwback 2000s silhouettes, like shimmering party tops, bodycon styles, vinyl trench coats, and halter backless dresses. In a collaboration with Yahoo, Schloss said they wanted to “really push the whole fantasy of what we can create.”

The LA-based designer, whose label is named after her mother’s maiden name, got her start under Kanye West’s wing, beginning as an assistant at Yeezy and working her way up to a womenswear designer. Three years ago, West awarded her the first grant from his incubator program and she founded her own label.

Since then, her clothes have been worn by Kim Kardashian, Bella Hadid, and Kylie Jenner and have had screentime in the HBO show “Euphoria,” where e-girl aesthetics and fantasy makeup reign the high school’s hallways.

Schloss has previously experimented with digital presentations, but here she took a hybrid approach, considering home viewers as well as in-person attendees. The entire collection is also available through a shoppable site, made by Yahoo, that features augmented reality (AR) versions of the models that can be placed in one’s personal space.

Nigel Tierney, who helms Yahoo’s Content Innovation, said the show is far from the “traditional passive viewing experience” of a fashion show.

“They can play with the assets in their environment,” he said. The “Monster High”-inspired cast, like the cool daughter of Frankenstein’s monster, Frankie Stein, can show up in AR anywhere the user is, wearing Maisie Wilen’s clothes, and move in the space — in Frankie’s animation, for instance, she gets electrocuted. “We’re thinking about stepping into these worlds like the metaverse and what that means to individual brands,” he added.

To create the larger-than-life holograms and AR imaging for the show, Yahoo’s team set up 106 cameras around the models in a studio space, capturing 360 imaging in super sharp 6K resolution to show every detail of the clothes. Maisie says the experience is “almost like living inside of a GIF lookbook.” The imaging “brings so much dimension to the clothing…you get to see it move in this very surreal yet lifelike manner,” she said.

Luxury For Less: 5 Tips For Glowing Skin This Winter