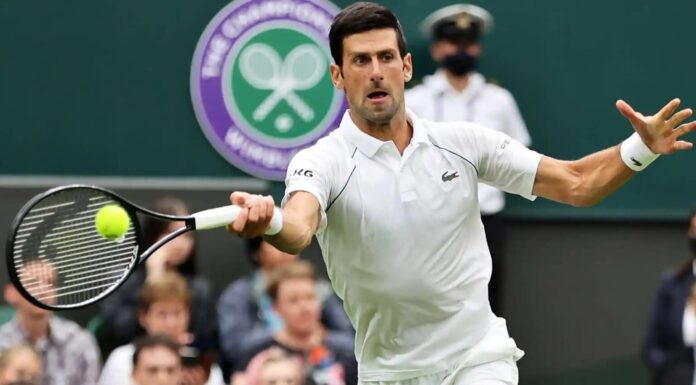 London: The six-time champion Novak Djokovic advanced to the third round at Wimbledon with a 6-1, 6-4, 6-2 victory over Thanasi Kokkinakis of Australia here.

Djokovic was imperious from the start against the World No. 79, striking the ball cleanly from deep and moving smoothly around Centre Court in one of his most complete performances of the year.

He broke the Australian’s serve five times on his way to a two-hour victory that extended his winning streak at SW19 to 23 matches.

Djokovic’s next assignment in his bid for his fourth consecutive Wimbledon title is a third-round clash against countryman Miomir Kecmanovic, after the World No. 30 held off Alejandro Tabilo for a 7-6(4), 7-6(3), 3-6, 6-3 second-round win.

“I’m very happy with my performance today,” said Djokovic in his on-court interview.

“I thought I started off very well, very solid from the back of the court, made him work for every point that I managed to get his serve back in play. I tried to work him around the court, bringing a lot of variety in the game.

“It was not easy to serve because of the wind, it was very swirly today on the court, so tough to toss the ball. But I think from my side overall, a really high-quality performance and I’m very pleased.”

After he was pushed to four sets by Soonwoo Kwon in his first-round match on Monday, six-time champion Djokovic spoke of needing time to adjust to the surface in his first grass-court tournament of the season.

One game was enough for the six-time champion to click into top gear on Wednesday against Kokkinakis, however. Djokovic broke the Australian in the second game and didn’t look back, winning 45 per cent (40/88) of points on return in a high-quality display.

“I must say that I’m quite pleased with the way that I raised the level of tennis in two days,” said Djokovic.

Serena determined to do well at US Open after Wimbledon exit

London: American tennis ace Serena Williams is keen to play in her home Slam — the US Open — after the winner of 23 Grand Slam singles titles lost the three-hour long opening round Wimbledon Centre Court battle to Harmony Tan of France 7-5, 1-6, 7-6 (7).

In the longest match of the tournament so far, Tan twice came back from a break down in the third set to notch just the third Grand Slam main-draw win of her career.

“When you’re at home, especially in New York, and the US Open, that being the first place I’ve won a Grand Slam, is something that’s always super special,” Williams was quoted as saying by wtatennis.com.

“Your first time is always special. There’s definitely lots of motivation to get better and to play at home,” she added.

Serena had returned to singles action for the first time in 12 months.