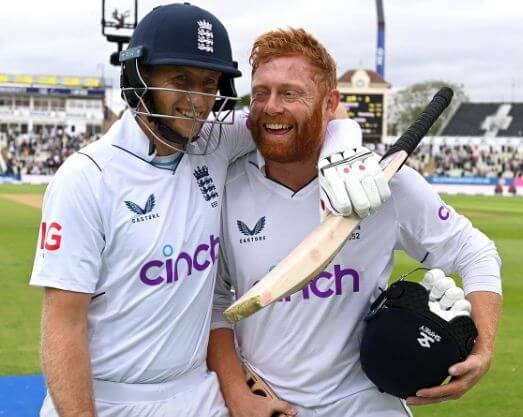 Birmingham: Joe Root slammed his 11th Test century since 2021 while Jonny Bairstow hit his second hundred of the rescheduled Edgbaston Test as England defeated India by seven wickets on the fifth day of the match.

The successful chase of 378 is also the highest England have chased ever in Test cricket. After chasing 277, 299 and 296 against New Zealand, England chasing 378 against India also made them the first team in Test cricket to chase four 250+ scores successfully in consecutive matches.

Root and Bairstow were efficient, flawless and dominant in their unbeaten stand of 269 as the Bazball winning juggernaut continued for England.

Nine balls into day five in front of a crowd offering free tickets, the ball was changed, not for the first time in the match. The last time the ball change happened; India got three quick wickets on day four. But Jonny Bairstow quashed all hopes of an encore, slamming back-to-back boundaries through cover point and backward point.

Root survived chopping onto his stumps off Shami, but apart from this, looked in immaculate control. India were all over the place with the ball, with Shami leaking eight byes and giving England free gifts. Another ball change happened in the 65th over, but it brought no respite for India as Root hit Jasprit Bumrah for successive boundaries — steering through the third man and leaning forward to clip through deep mid-wicket, which also brought the 200 of the partnership.

Addressing the media after England’s emphatic win over India in the fifth and final Test of the 2021-22 series — by virtue of which the hosts drew level at 2-2 — Joe Root, the deposed captain but still the master batsman, said that “people (opponents) could now be intimidated by us (by the way we are playing)”.