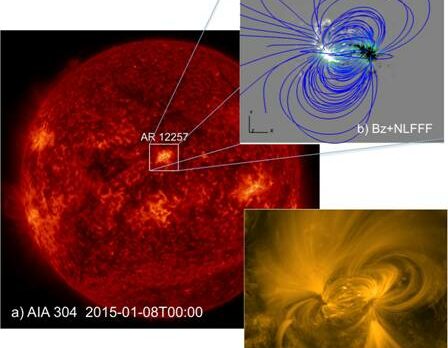 New Delhi: Changing the structure of the magnetic field on the Sun’s surface determined whether a flare or a Coronal Mass Ejection (CME) was emitted. This understanding will be useful in improving predictions of solar weather, which affects electrical, and communication systems on Earth and satellite systems in space.

Dr P Vemareddy of the Indian Institute of Astrophysics (IIA) Bengaluru had first spotted a peculiar evolution of helicity injection in the Active Region called AR 12257 without CMEs. The scientists studied this astronomical event based on the magnetic and coronal images of the Sun, which are taken every 12 minutes by NASA’s Solar Dynamics Observatory in space, and found that the active regions (AR) on the sun injected positive helicity in the first 2.5 days followed by negative helicity afterward. The study showed that active regions where the sign of the helicity reverses with time cannot produce CME.

The results of the study have been published in the journal Monthly Notices of the Royal Astronomical Society.

“Surprisingly, the magnetic structure that we derived from the data did not show any twist in the core of the active region,” said Dr Vemareddy. According to the IIA team, studies on how helicity is injected are key to predict the eruptive potential of an active region, and these results are expected to shed light on magnetic field production in stars and planets as well.

The Sun has a complex magnetic field near its surface that is connected to its hot plasma and changes its configuration all the time as the plasma itself moves around in this field. The underlying magnetic configuration that stores energy is typically seen as having twisted magnetic fields, which are quantified by a parameter known as magnetic helicity.

The corona of the active region (AR) is being pumped with such twists or magnetic helicity. When helicity reaches beyond a threshold level, CME is the only way to remove the excess helicity. However, finding the threshold level of the coronal helicity budget is still a formidable problem for the prediction of a CME eruption in due course of the AR evolution.

In a first, a Strange Quantum Object created in Lab

What’s inside a black hole?