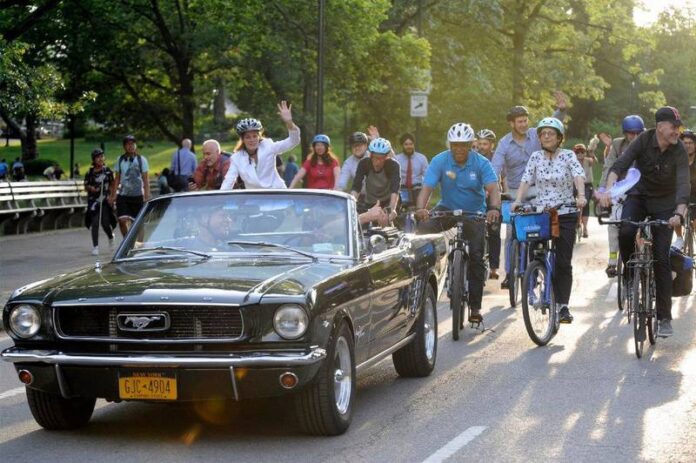 Cars have been driven from Central Park.

As of 7 p.m. Tuesday, autos riding around the landmark park were officially in the rear-view mirror, and city transportation officials and cyclists were ready to celebrate a new, car-free era of Central Park.

The honor of driving the last car out of Central Park went to Paul Steely White, the executive director of Transportation Alternatives, a group that had long advocated for a vehicle-free Central Park.

Although the tranverses will still be available to vehicles, the closing of the open road in the rest of the park was welcome news for cyclists, runners and other visitors.

“It’ll be nice to have the park wide open,” said Sean Montgomery, 30, who was decked out in cycling gear. The Hoboken, N.J., resident said he’s been riding daily in the park for seven years. “I’m sure it’ll cut down on accidents. The park is a real oasis.”

For Rory Mahon, the policy has been a long time coming.

“It makes it safe for us who rely on the park to escape the already clogged streets of Manhattan,” the 43-year-old Upper West Sider said.

The rollback started in 2015, when cars were banned above 72nd St. Then the city gave cars the boot from Prospect Park. In honor of Earth Day in April, the de Blasio administration announced the expanded ban on cars in Central Park.

“Thank God we’re getting rid of the cars,” said Jane Lytle, 70, of the Upper East Side. “It’s a park, we’re here for the trees and fresh air, as opposed to being almost run over by the cars.”