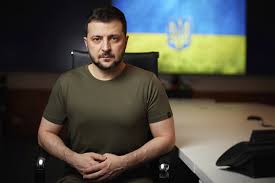 Kyiv: Ukrainian President Volodymyr Zelensky said the ongoing war with Russia will not end until the Black Sea peninsula of Crimea, which was annexed by Moscow, is liberated.

“Crimea is Ukrainian, and we will never give it up,” the DPA news agency quoted the President as saying in his recent video address. “The Black Sea region cannot be safe as long as Crimea is occupied,” he said.

“There will be no stable and lasting peace in many countries on the shores of the Mediterranean Sea as long as Russia is able to use our peninsula as its military base.

“This Russian war against Ukraine and against entire free Europe began with Crimea and must end with Crimea, with its liberation,” Zelensky added.

Earlier, a series of explosions hit the Saky military base near Novofedorivka located in the west of Crimea, killing one person. While Russia has played down the explosions, a top Ukrainian adviser denied that Kyiv was responsible.

Crimea is officially part of Ukraine but was annexed by Russia in 2014 after a referendum that the international community sees as illegitimate.

Meanwhile, Zelensky also called on Western countries to ban all Russian visitors. Russians should “live in their own world until they change their philosophy,” Zelensky told The Washington Post.