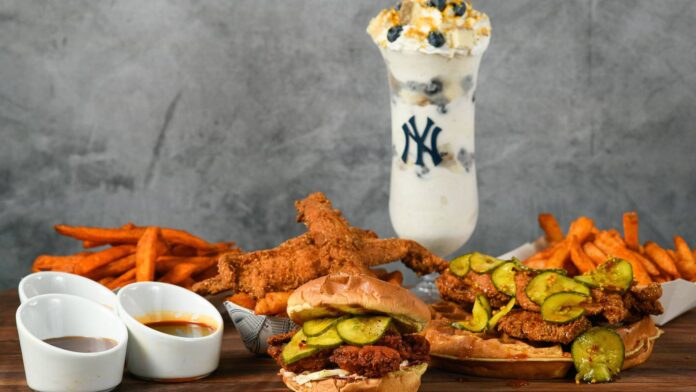 A week and a half after the Mets wined and dined the press by letting them try out the new food at Citi Field, the Yankees had their turn.

The Yankees’ version of the event featured much less pomp and considerably less circumstance, but the food is still likely to leave fans very full and very satisfied when they leave the ballpark.

With celebrity chef Marcus Samuelsson on hand to introduce his new additions to the stadium — his restaurant Streetbird is now in Section 112, featuring chicken sandwiches and a Blue, White & Gold milkshake that comes with cheesecake chunks and fresh blueberries — there was an excitement permeating through the stadium’s suite level on Tuesday morning.

“It’s such an honor,” Samuelsson said of having his cooking available at Yankee Stadium. “This is the most iconic stadium in the world. For our chicken to be available here is such a privilege. It’s really emotional for me. I’m part of New York now.”

Streetbird’s Hot Bird Sandwich, a boneless chicken thigh with house made pickles and slaw, was an instant hit. The Streetbird station also offers a new chicken and waffle sandwich served on a cornbread waffle with hot honey.

“It’s delicious,” Samuelsson beamed. “We cook that bird in a very special way. Our chicken and waffle is world famous. It’s just fun to have something here.”